Grandmont Patrol #4 is one of the most active and respected patrols in the city of Detroit. This is in large part due to the dedicated leadership of Mr. Muhsin Muhammad I, lovingly known as COACH MUHAMMAD. Thanks to Coach, Grandmont is recognized as one of the safest communities in Detroit.

Our patrol was organized over fifty years ago after the 1967 uprising. It is supported by local, county and state law enforcement. We were the fourth patrol to become active in Detroit, hence GRANDMONT PATROL #4. Originally, the patrol used CB radios to communicate, but we currently use official police radios supplied by the Detroit Police Department. 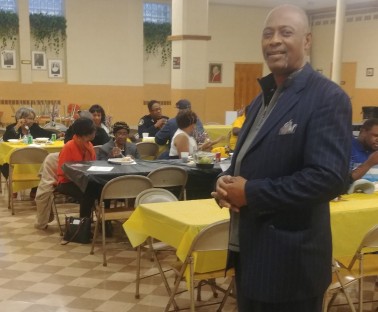 "Coach" Muhsin Muhammad is pictured at the Grandmont Patrol #4 Appreciation Dinner held at Christ the King Church on October 12, 2019. Coach Muhammad received a special plaque at the dinner commemorating his outstanding leadership of the Radio Patrol and years of service to the Grandmont community. Detroit Police Department Deputy Chief Todd Bettison spoke, and received an award in recognition of his management of radio patrols citywide. Also at the dinner, each Radio Patrol member received an embroidered polo shirt.

2018 was another successful year for our patrol. We patrolled our 42 blocks for 1,650 man-hours and drove for 2,735 miles in service to the Grandmont community.

All Patrol members received new cold weather jackets with our logo embroidered on them so the lettering won't wash or wear off. Also, Patrol members were rewarded last June with a chauffeured trip to the fireworks where we had a great dinner and entertainment aboard the Princess boat at the foot of Hart Plaza. We had the best view possible without the hassle of driving, parking, walking and dealing with the large crowd. It was a very memorable experience that was enjoyed by all!

The Grandmonitor is back online!